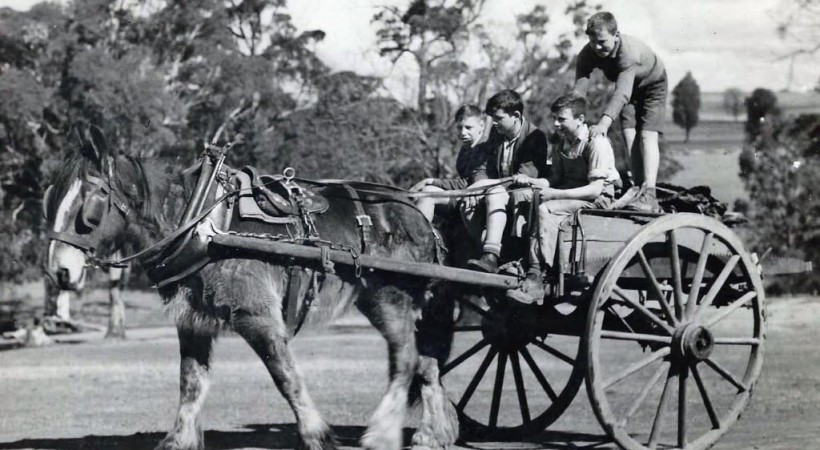 The history of Mowbray Park FarmStay is rich and integrated into many stories of NSW colonial settlement.

In April 1821 a young Scotsman Daniel Maclaine Ross made formal application to travel to the Colony of New South Wales as a Free Settler. He also wrote to the Colonial Office applying for a grant of land.

He left Scotland in June 1821 sailing on the “Royal George” with the Governor Elect of New South Wales, Sir Thomas Brisbane, who had been sent to relieve Governor Macquarie (a relative of Daniel Maclaine Ross).

They arrived in Sydney 6th November 1821.

On 15th February 1822, “a promise” of a grant of land of 1000 acres in the COUNTRY OF CAMDEN was made by Sir Thomas Brisbane to Daniel Maclaine Ross.

That grant, to be known as “Scarbright Park”, was not fulfilled till October 1830, but that did not prevent Maclaine Ross from selling conditionally in March 1824 to another Scot, Dr William Panton.

The solicitor involved in the conveyancing was William Charles Wentworth, Australia’s greatest statesman, who in his diary noted the fee for the transfer as “Twenty Spanish Gold Dollars”.

Dr Panton renamed the property “Montpellier Park” and during the 12 years he owned it several famous explorers like Berraller, Sturt, Stephenson and Cunningham passed through on their historical travels.

Within a year Dr Panton had another medico on his eastern boundary, Dr Elyard.  Whilst not directly linked to Mowbray Park, Dr Elyard significantly added to the history of the area.  He served in the British Fleet with Nelson at Trafalgar and was the recipient of this title grant  when his service was completed.

In 1876 a Sydney solicitor, William Barker, purchased the property.

Mr Barker had come to Australia with his family at the age of 15. He started work as an office boy for the firm of James Norton, Sydney’s leading solicitor. In due course he qualified as a solicitor and eventually joined Norton in partnership.

In 1858 Barker had a client who approached him for advice. This client did not take too kindly to the advice given and in the diary he kept (which is now lodged in Sydney’s Mitchell Library) he wrote about the meeting and advice.

Dated November 4th 1858. “Up at 5am – an hour at Greek – Went to Sydney and called on Mr Norton who told me he had consulted his partner, Mr Barker, on the matter of my going to the Bar”. (The client had just been declared bankrupt and was looking around for a new occupation.)

Mr Barker was called in and told the visitor he did not think he had the mental qualifications to go the Bar, besides which he felt the bankruptcy might disqualify him. The diary continued, “Well, though I have not the stupendous powers of mind of a Norton or a Barker we shall see. Went straight from Norton and ordered a Ten Guinea Wig”.

The man who wrote the diary was Sir Henry Parkes – The Father of Federation.

In December 1876 Barker wrote to Parkes and said “at one time I thought you to be a dangerous man, and now it is my considered opinion that you are now our most safe, and one of our most consistent statesmen. Beyond all question our ablest statesman”.

How the property got its name


William Barker was reputed to be descendent of Geoffrey de Mandeville, the 1st Earl of Sussex, contemporary of Robert Mowbray.

“Mowbray” is the name of an English Baronial Family. The name was derived from a place called Montbray near St. Lo in Normandy. It was founded by Geoffrey de Montbray, Bishop of Constance who was a statesman and principal adviser to William the Conqueror. After the Great Victory of 1066 William the Conqueror gifted Montbray 280 manors in 12 counties of England.

A descendent, Roger, one of the 25 barons appointed to enforce the Magna Carta, changed the name to Mowbray .

The male line of the Mowbray’s became extinct when John Mowbray (4th Duke of Norfolk) died in 1476.

In 1476 the titles and estates passed to the Howards, representing the daughters of Thomas Mowbray, (1st Duke of Norfolk)

While the Barkers were on holiday in England in 1877, a year after they purchased the property, the House of Lords announced that Baron Stourton, a co-heir of the Howard family line, had successfully claimed the title of Baron Mowbray.

On his return to Australia, William Barker renamed the property “Mowbray Park“ to link it back to the family history line.

The present homestead was built by his son, William Manderville Barker about 1884. He bought out an architect from England to design the house, which took some years to build. In the late 1890’s he added the North Eastern wing, which included a Ballroom.

In July 1905 the private road from Mowbray Park to Picton via Thirlmere, which was constructed at the direction and expense of William Manderville Barker, was given to the Government and officially gazetted in July 1905.

In September of that year the property was sold to Captain Frederick Waley who was awarded the C.B.E in 1920 and knighted in 1923.

After World War One, Sir Frederick and Lady Waley allowed the Red Cross to use the property for treatment of “shell-shocked soldiers” and in March 1920 decided to donate the property to the Commonwealth Government.

The Governor General, Sir Ronald Munro-Fergusson, at a ceremony held in the grounds of Mowbray Park on 3rd March 1920, officially accepted the gift.   The Waleys remained on the management Committee of what became known as “Waley Home“.

By the end of 1924 the Repatriation Department had no longer the number of patients required to justify its use as a Convalescent Hospital and the property was sold in 1925 to B.H.P. Pty Ltd – Australia’s largest company. They used Mowbray Park as a local headquarters for their drilling operations in the Shire of Wollondilly.

Renovations and extensions were undertaken – the Ballroom became the Dining Room and the stables, a recreation hall.  On 20th November 1929 the Governor, Sir Dudley de Chair attended the opening.

Later the horse stables were converted into a Chapel and consecrated by the Anglican Archbishop of Sydney.

In 1939 a new Cottage was erected on the south side of the homestead. This was named the “Millions Club after Sir Arthur Rickard’s Club – which had provided 50% of the money to build it.

During World War II at the request of the C.S.I.R.O., the first Opium Poppies produced in any great quantity in Australia were grown on five acres of land at Mowbray Park. This helped greatly with the supply of morphine required for our overseas troops.

In 1959 the Directors of the “Barnardos Homes” realised that insufficient British children were arriving in Australia and interest in life on the land was declining so, reluctantly, it was decided to sell the property. The new owners, a pastoral company, sold out in 1970 to a developer, Emanuel Margolin. He in turn only had the property for a couple of years.

Dr Couch and his wife Margaret purchased the property in 1972 and from that time has been both a working farm and farmstay.

Absolutely beautiful place a must... MORE

Thank you so much for the most... MORE

Well thank you very much, we get a lot back from our guests who engage , hope you can get back down here some time.

Wow, so pleased you got the experience you were hoping for, means a lot to us as well. Thanks for coming down and hope to see you again.